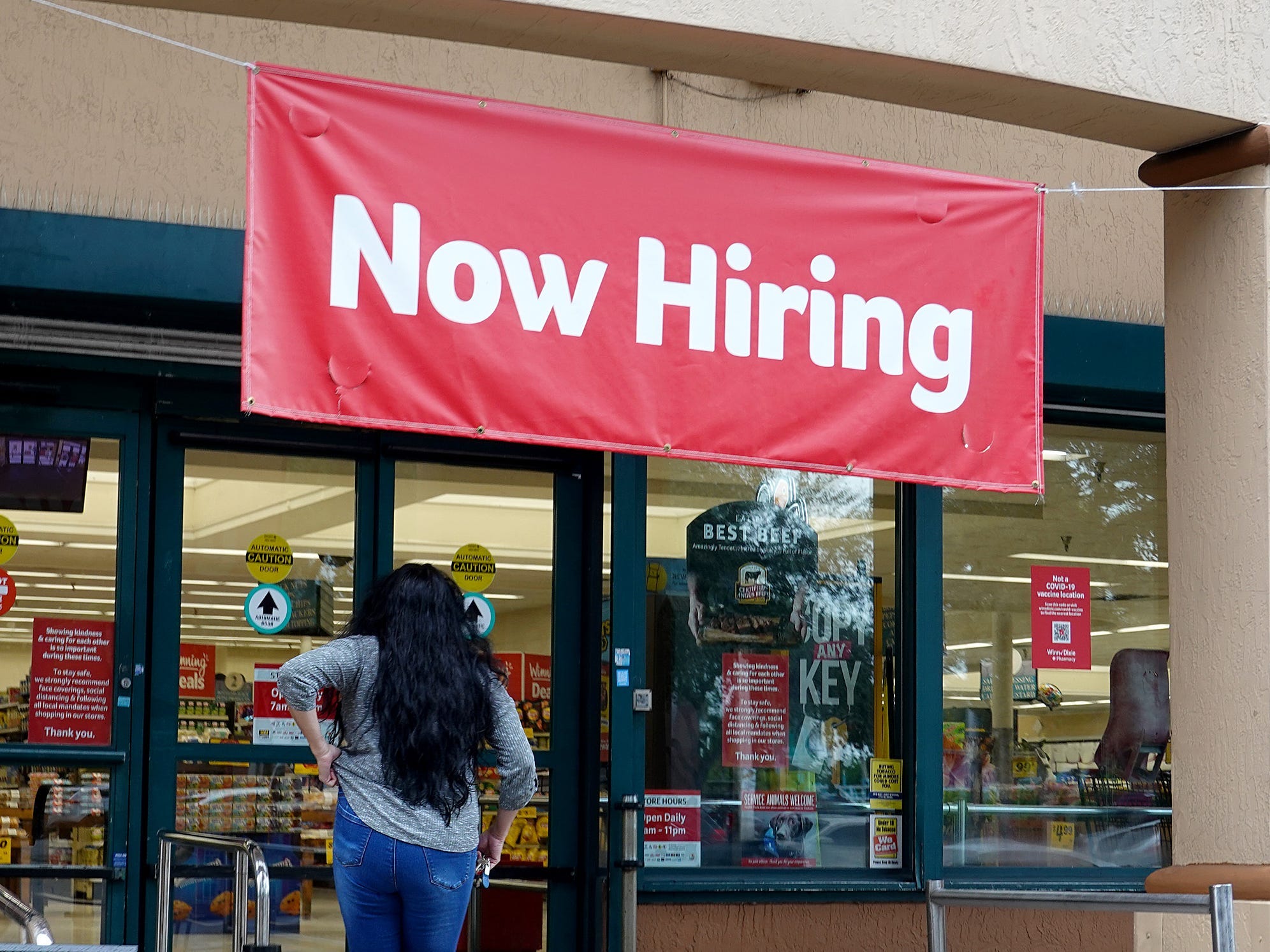 A Now Hiring sign hangs near the entrance to a Winn-Dixie Supermarket on September 21, 2021 in Hallandale, Florida.

Paul Constant is a writer at Civic Ventures and cohost of the "Pitchfork Economics" podcast.
In this piece, he breaks down several underlying issues influencing the current labor shortage.
If employers really wanted to hire people, they'd raise wages and improve working conditions, Constant says.

The signs, posted at fast food restaurants and shared all over social media, have practically become a cliche by now: "WE ARE SHORT-STAFFED. PLEASE BE PATIENT WITH THE STAFF THAT DID SHOW UP. NO ONE WANTS TO WORK ANYMORE." Variations of the signs include additional complaining about "government handouts" or the government "paying people to stay home," but the gist is this: Employers are unable to find labor to staff their jobs, and as is often the case, they're eager to blame anyone but themselves for the shortage.

Of course, everyone knows that the truth about the so-called labor shortage is that nobody wants to work for the low wages and lousy work conditions those employers are offering. That's why many of the fast-food restaurants that post "no one wants to work anymore" signs also have signs up encouraging teenagers as young as 14 years old to apply for the jobs. (Many states allow sub-minimum wages for teen workers that go as low as $4.25 per hour.)

At the same time, union workers around the country are going on strike to demand better wages, more humane schedules, and some say in the direction of their workplaces. Because there are so many open positions in the job market right now, wages are climbing higher than at any point in the last two decades. And white-collar workers are leaving their good-paying office jobs in huge numbers, too, in what is now referred to as the Great Resignation.

Read more: Fewer adults see their job as a source of life's meaning, and it shows how the pandemic has changed America's relationship with work

This is the first time in the 21st century that American workers have held the upper hand over employers. But why are so many positions open? Those fast-food workers can't all be migrating to better-paying jobs, can they? Several converging issues are at play.

Because women are still expected to be the primary childcare provider in many American homes, and because the pandemic wiped out whole swaths of the child care sector, women left the workforce at up to four times the rate of male workers during the pandemic to care for their kids.Economic commentator Noah Smith points out that immigration to the United States has basically dropped by half since Donald Trump won the White House on a racist, anti-immigration platform in 2016. That amounted to two million fewer immigrants than were originally projected to arrive in America in 2020 — and many of those immigrants worked the low-wage jobs that "nobody wants to work anymore."   And we can't ignore the horrific truth that more than three-quarters of a million Americans have died from COVID-19 since March of 2020, a significant share of the population of working-age Americans. Additionally, many Americans (including those in high-risk health categories) likely don't feel safe enough to rejoin the workforce with the pandemic still surging out of control in regions around the country.

If employers really wanted to end the Great Resignation tomorrow, they could raise wages and make their businesses a more humane place to work. That would have the additional effect of giving workers more money and time to invest in their local economies, further increasing job growth.

But they should also support candidates who champion policies that would get more Americans back to work — policies like affordable childcare, better and more welcoming immigration standards, and sensible public health policies that would allow more people to safely participate in the economy without frequent eruptions of deadly COVID outbreaks.

Read more: Childcare centers say they're turning down desperate parents because they don't have enough staff to look after more kids

However, the news isn't all great for American workers, either. Though paychecks are rising, so are prices. As Civic Ventures President Zach Silk notes in "The Pitch," the sister newsletter of the Pitchfork Economics podcast, when you take the international spike in inflation into account, the average American paycheck has actually decreased by 1.2% since last October.

"If I were an economic advisor to the Biden Administration," Silk wrote, "I would emphasize the importance of raising wages in conjunction with all the other policies that might help with supply-chain issues and global inflation."

Silk concluded, "Rising prices don't have as big an impact on your life if your paycheck is growing faster." The Great Resignation needs to continue in order for American workers to thrive, and our leaders must make it easier for them to get the raise that they so desperately need.

Share the post "The truth behind the Great Resignation: Americans are sick of low-paying, dangerous jobs and they’re fighting for better"

Special needs parenting: Running into Spring
how can I come out as queer mid-career?
5 Stages of Violent Crime
Facebook's crypto chief is exploring NFT-related products and features - but views bitcoin as too vo...
10 best Android cooking games and restaurant sims
How to Start Reselling Shoes and Make Some Serious Money